From The Annandale Blog:

Interim park to open in Bailey's Crossroads in June 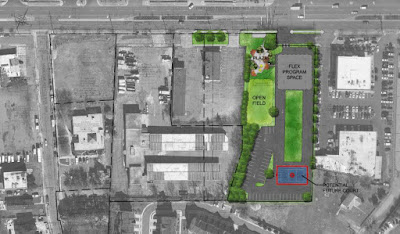 The site design for a temporary park in Bailey's Crossroads next to Radley Acura. Columbia Pike is at the top of the image. [OCR]Construction of phase 1 of Crossroads Interim Park in Bailey’s Crossroads is expected to start in late March or early April, and the park would open to the public in June.

The park will be developed on the site of the former Landmark office building on Columbia Pike in between Radley Acura and the vacant lot where the Safari Restaurant used to be. That land is owned by Fairfax County, and the park would be in place only until the county decides what to do with the property. 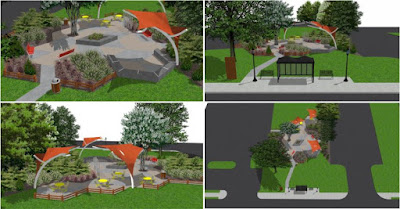 An illustration of the proposed plaza. [OCR]The county’s plans for the interim park were presented to the Bailey’s Crossroads/Seven Corners Revitalization Corporation Feb. 20 by Suzie Battista of the Fairfax County Office of Community Revitalization and other county officials.

Phase 1, in the area closest to Columbia Pike, would have a small plaza with native plantings, seating, and “shade sails” consisting of canvas over metal structures. It would also have an area for events and pop-up programming, such as a small farmers market and concerts

Construction of Phase 2, at the rear of the property, is most likely a year away, Battista said. It won’t be designed until the county can assess community feedback and see how Phase 1 is working out. That area could have a basketball court and a small athletic field for children’s sports.

At the BC7RC meeting, concerns were raised about access, parking, safety, trash dumping, maintenance, electricity for events, and lighting.

The county is working with the police to ensure safety at the park and the Office to Prevent and End Homeless to discourage homeless people from camping out in the park. The Bailey’s Crossroads Community Shelter is close by on Moncure Avenue and so is the new shelter under construction on Seminary Road. It is expected to open later this year.

The county is leaning against providing lighting at the interim park, as it doesn’t want to encourage people to be there after hours. The park would be surrounded by fencing in some places and a guard rail in others. There would be about 100 parking spaces.

The interim park is adjacent to the property owned by the Weissberg Corp., which is considering options for development of multifamily housing.